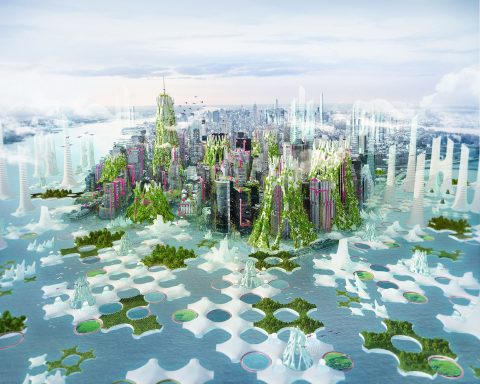 Responding to the severe consequences of warming, Decarbonized Reef Cites presents an architectural framework that facilitates the social, economic, and environmental changes necessary to create self-sufficient and decarbonized global cites that exist in harmony with their native biospheres and resource sheds.

Decarbonized Reef Cities is a speculative architectural response to global warming to consider how humanity can react to a warming planet and try to prevent further temperature rises. This proposal was submitted to Arch Out Loud’s Warming Competition and received an honorable mention. We saw the Warming Competition as an opportunity to explore systemic ideas related to causes of our warming planet, and address those causes through an architecture sited along the world’s coastal cities. These are sites with large populations that planetary warming poses an increasing threat to human habitation. 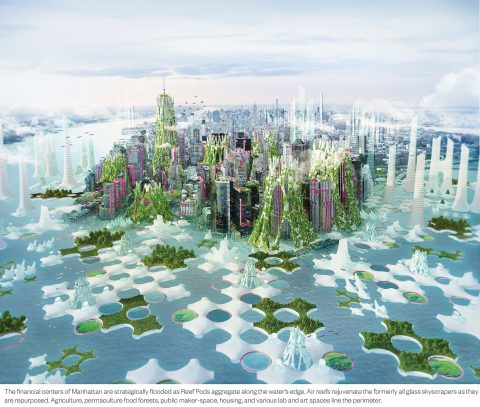 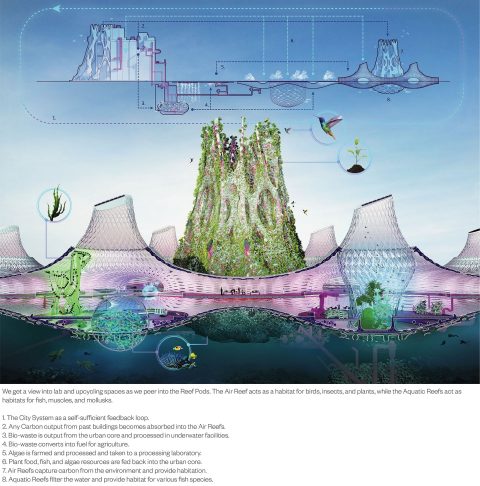 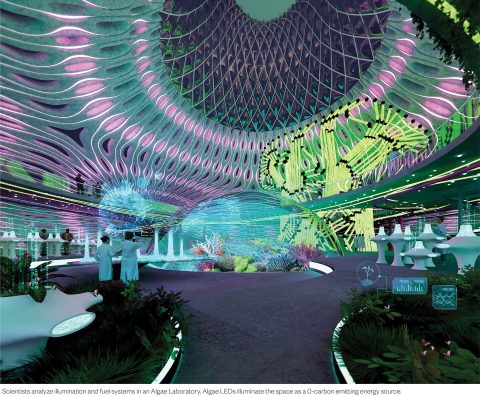 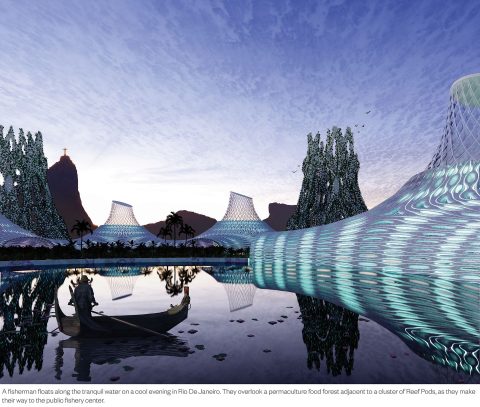 Warming is an existential threat to humanity and everything we value in the living systems that sustain us. The collapse of entire ecosystems and mass species extinction presents a perilous future. Our looming existential threat is not merely a technical challenge that we can react to and can solve through technological solutions. It is just as much a social and economic challenge. The way in which our current society is organized - revolving around endless growth, mass consumption, waste production, burning of fossil fuels, deforestation, and industrial monocrop agriculture - is a primary cause of planetary warming. This is intrinsically unsustainable, and continuing these practices presents a direct threat to organized human life.

Fortunately, there are other, more sustainable ways to organize our civilization. This presents an opportunity to reimagine our world through architecture that lives symbiotically with its surroundings. We must reverse the patterns of extraction, warming, extinction, and collapse with design that regenerates and repairs instead of destroys. And why is this not solely a technical challenge? Large infrastructural developments might indeed prevent Manhattan from flooding but preventing coastal cities from flooding will be meaningless if carbonic acid from CO2 continues to accumulate in our oceans, decimating almost all aquatic life. So, rather than assuming a continued reliance on extracting as many resources as possible and burning through all remaining fossil fuels to transport them around the globe, we propose that global cites adapt to a circular economic model like ones laid out by the Ellen MacArthur Foundation.

Decarbonized Reef Cites is an architecture that facilitates the social, economic, and environmental changes necessary to prevent the worst effects of warming by developing a framework for global cites to become self-sufficient and decarbonized, existing in harmony with their native biospheres and resource sheds. Humans exist as part of nature, and as more of us live in urban environments, our cites should reflect and incorporate the natural biodiversity of where they are situated. Instead of ignoring and displacing local ecosystems, as has been practiced by city development for hundreds of years, we propose that our cites embrace and foster the thriving of local wildlife throughout. Our vision rewilds the urban fabric, incorporates sites for localized food production and localized manufacture, reutilizes material waste, captures and processes bio-waste for fuel, and embraces an aquatic future for our coastal cities. The city becomes a perpetual self-sufficient feedback loop that does not rely on the carbon-generating industrial practices that directly cause what we are trying to prevent. To this end, we no longer assume the neoliberal city as the default.

We achieve this by touching lightly, as opposed to brute-force geo-engineered solutions. Decarbonized Reef Cites blurs the boundaries between land, sea, and air by strategically allowing for the passage of water through existing infrastructure as sea levels rise. Pods float to not disturb their underwater ecosystems. They are equipped underneath with artificial reefs to house a variety of aquatic life that regenerates the watershed. Above, exist Air-Reefs that capture carbon and provide habitat for local plant and animal species. These Air Reefs act as a secondary skin that encapsulates pre-existing architectural structures in order to decarbonize and repurpose them for broader public facing use. This secondary skin acts as a heat sink for its building. Floating Aquatic Pods house a variety of programs, from permaculture food forests, housing, and parks to laboratory facilities and indoor/outdoor public community spaces. These pods facilitate the social practices embedded in a decarbonized city by providing creative spaces for upcycling previously mass-produced consumer goods – converting waste into resources. Biological waste from sewage systems is processed and converted into fuel for agriculture and production. Algae is grown, harvested, and utilized for energy to replace fossil fuel usage.

All of this hyper-localizes social and economic activity by looking at the city as a feedback loop. Waste is output from the urban core and is processed and reutilized rather than sent to the oceans as pollution. This fuel feeds local production and sustains natural ecosystems that are then fed back into the urban core. Decarbonized Reef Cites’ localized self-sufficient loop impacts the larger global environment by changing our relationship to how humanity exists in the natural world as stewards, rather than devourers. This framework is a model for all global coastal cites soon to be impacted by the existential threat planetary warming poses.