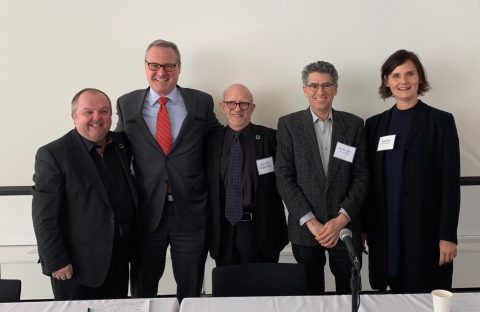 An excerpt from the SDG round-up in World Urban Campaign:

The commonalities between scholarly investigations and professional practices, many panelists suggested, outweigh differences between those institutions. In the morning panel on “Urban Professions and Governance,” organized and moderated by CSU’s President Brown, Ennead managing partner Don Weinreich, FAIA, emphasized aspects of practice that have “made the place feel a bit more university-like.” The firm's Ennead Lab, established in 2010, uses Socratic methods to interrogate the contexts and assumptions connecting projects and challenges, yielding achievements such as the Fostering Resilient Ecological Development program at Far Rockaway after Superstorm Sandy; a 20-acre residential Heroic Food Farm that matches veterans returning from overseas, often in need of new careers and missions, with a rural area near Hudson, N.Y., that faces a shortage of farmers (“turning a double negative into a positive”); and Rethinking Refugee Communities, a collaboration with the UN High Commissioner for Refugees and Stanford University, recognizing that refugee settlements worldwide are more like cities than “camps” and can be operated in ways that treat their populations as assets to host areas, not burdens.